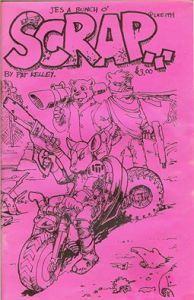 Scrap by Patrick Kelley is a rather unique publication. A single issue comic book, with a sci fi comic, and sci fi clean furry art between it’s colorful cover. Really it’s only fault is the comic, I found it hard to follow mainly because he decided to use extremely tiny print. I was unable to read most of it until I scanned it. Even then I still found it kinda hard to follow. The only reason to snag yourself a copy is because of the art.

I give it 3/5 good but nothing really special.

As I was doing research on Scrap I found the last time Patrick Kelly was seen was at AC 2013. Since then all of his accounts have become inactive.

So I propose a logic puzzle to you. Take one that is near and dear to my heart. Furry fanzines/comics do you preserve them or let them turn into dust. Keep in mind it was printed on cheap paper that will not last 75 years until the copyright runs out. But still you want to protect those involved copyright. But on the other hand if you let them turn into dust part of furry history will be gone forever.

What is your answer?