by Rodney Ho on AJC.com This is Life with Lisa Ling will be taking on Furries in this upcoming season. According to the article. 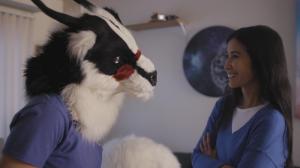 This is Life with Lisa Ling, the CNN hour-long weekly series returns for a fifth season of eight episodes Sunday. Ling’s style of reporting is earnest and straightforward, with nary a trace of partisanship.

But not every episode she does is that dark. She also delves into the world of “furries,” a group of people who like to dress up in full-body animal costumes.

Ling said fans over the years had suggested she do an episode on them but “discounted them at first. It sounded silly. Some on my team thought they were a bunch of sexual deviants. But when we started asking around, it’s actually a massive community of people for whom sex is not the reason they do it. The majority of people who profess to be ‘furries” suffer from extreme social anxiety.”

Ling interviewed one “furry” out of costume and “she could not stop shaking.” But once in her outfit, “she became an entirely different person who wasn’t afraid of anyone.”

The episode is called “Furry Nation” and will air on Nov 18, check your schedule for exact times