Seriously I forgot I picked this up at MFF last year and brought it with me when I had to see my doctor and what I found. Blew me away the humor and brilliance of this story of 3 anthro cats living with a family of humans. Their brother who can fly and their bear butler is totally delightful in this family-friendly story. I really didn’t even know this was the collected work of a webcomic The Fuzzy Princess check it out, it is worth getting. 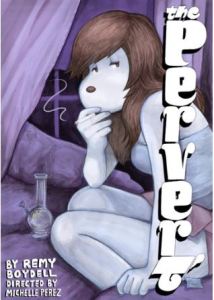 “The Pervert” is a comic about a Seattle-based trans woman struggling as a sex worker to make enough money for hormones and gender confirmation surgery.

Written by Michelle Perez and illustrated by Remy Boydell ― both trans women ― the comic offers a humanizing portrait brimming with wit and melancholy, despite the fact that it revolves around an anthropomorphized canine. In the opening scene, Felina goes down on a “fiscally conservative, socially libertarian” guy in a fast food joint. While performing the act, she zones out, focusing her attention on the dining establishment’s hypnotic ball pit and the kids playing inside. Her mental landscape is illustrated in dreamy watercolors, a palette reminiscent of a bowl of Fruit Loop.

Looking into this subject is difficult for most, except for the author Michelle Perez who actually lived it according to the original post.